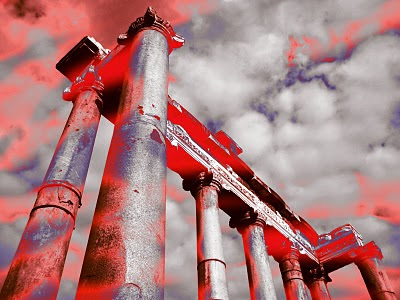 Walking through ancient Rome at Foro Romano, near to the Colosseum, the remains and artifacts of a once powerful empire, I came to realise two things....

Firstly, history should not be considered academic first and foremost. History is the recording of lived activity, it is the living of events that was and still is, of most importance. History is not some abstract, mental hypothesis, it is the accurate recording of actual events, as much as is possible. Hypothesis has its place, but this is secondary to the recording and communication of actuality. Writing as the raison d'etre of history, forces hyper reality, emphasising the power of the written word and those who record history.

Students of history (all of us) should realise the limitations of reportage, the responsibilities that come with supposition and the realisation that we are active participants in history. They should be encouraged to view archaeological sites and involve themselves archaeological research. They should be involved in local history projects - "living history". Seeing history as an academic or literary exercise makes it harder to communicate the actual events of history and their importance. This is particularly important today, when we are very concerned with the short-term and coerced into making snap decisions rather than considering the long term as well as the short term effects of our actions.

Secondly, Roman remains and their preservation have great relevance to today. As we know, Rome was a great power, much influenced by Greek civilisation. Roman society was intellectual, aesthetic, inventive and sophisticated. They also had a barbaric ad blood-thirsty side that helped them to extend their empire so successfully.

Today, our Greek-influenced, Western empire, lead by the United States, should learn from the history of Rome. No empire is too powerful or sophisticated to fall. We must make sure that corruption, like we have seen over recent years, does not cause the West to fall, as was the fate of Rome.

Leaving the awe inspiring ruins behind, gilded by Orange Trees, Cypresses, I watched the sunset behind the Colloseum and walked to a nearby cafe. "Bon sera, cafe americano per favore," I said in a French accent! "Coffee American coming right up Sir!" The waiter replied. "Grazie!" I said, hoping to tease some Italiano from him, "Preggo!" He replied almost like an after thought.
Posted by Crescentsi at 3:04 pm No comments:

A step too far by advertising and new technology

link
Posted by Crescentsi at 5:25 pm No comments: