the daffodils beside
this page revive
these damp though

waxen penitent emergencies
if this is
what we are

portents of lawn
filled leitmotif made
integral because portray

gifts lumens made
affordable through veiled
chance walking being
Posted by Sheila Murphy at 7:27 pm 2 comments:

Before this country comes to a stop.
I'd like to suggest something simple
and clear,
The thing you are trying to do
is the most important,
The proof of the pudding
is in the eating! 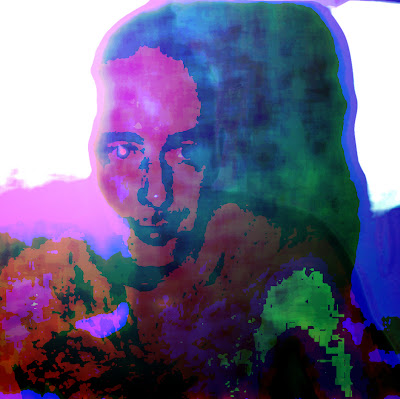 you is a
pronoun dig
I

witness protection programs
me to
rise

speakeasy
not so
easy at all
Posted by Sheila Murphy at 6:38 am 5 comments:

its the number of the postage

attunement limbers
while you
linger here 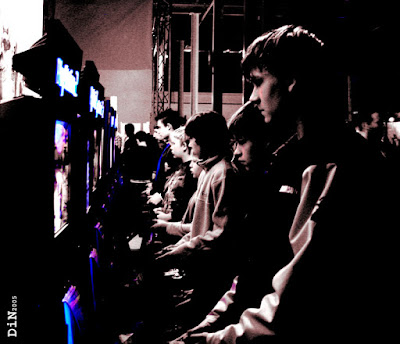 Hypereality was the state of Western society, now we have Nonreality.

Nonreality is not nothingness, nothingness confirms flux - it is the perception of, or value attributed to things rather than the absence of things.

Nonreality is the dismantling of Western culture and, at the same time, its resistance to this. Hypereality emerges when the significance of things outweigh the function or substance of things.

Nonreality is where the significance of things does not match the thing it signifies. Therefore, the "Hypereal linkage", where value shifted from things to their representation, has been broken. In other words, significance has lost contact with the thing that it originally signified.

One could argue that an artificial Christmas tree is a good example of Hypereality. This is because the actual tree is no longer present, only a representation is left. A sign, to appropriate meaning, rather than the actual thing its self.

A Nonreal Christmas may just include the presents and no artificial tree. Therefore the celebration of Christmas loses any contact with its original meaning, actual or signified. Instead Christmas becomes a celebration of a commercialised culture, that is at odds with the original intent of Christmas.

Hypereality functioned in the sense of representational meanings, that helped people to make sense of the world, even if though the original things have been lost.

Nonreality is a dislocation of represented things to their representational meaning. In other words we have not just compromised substance, we can no longer see the sense of these values that represented substance, by proxy. Therefore, we have an "arbitrary surface" in Western society. In other words, constant flux built around uncertain values.

Nonreality confirms Derrida's (and others') theory of Deconstructionism. The written word is toppling from its pre-eminent position in Western society. It has now reached the stage where the words used in the English language can no longer describe the experiences of individuals living in the west. This can be seen in textual art and poetic experiments, that can be viewed mainly on the Internet.

To comprehend Nonreality one must consider various social movements, occurrences and societal trends within the West, that have occurred over recent decades. Some I will list here;

- The ascent of technology, resulting in greater communications and travel.

- The current state of economies and employment in Western countries.

- The current malaise in Western politics.

- The ascent of multiculturalism.

- The ascent of feminism and changing roles for women.

- The increasing emphasis on business and profitability.

- The increasing amount of education, training and information available to people.
Posted by Crescentsi at 12:44 pm 11 comments:

This is by Carmen, /t. and Little Lamb. Carmen made the sign, it was my idea to put the lambs around the sign, and /t. brought it to pass. Thank you Carmen and /t. for participating. (Actually they did all the work.) 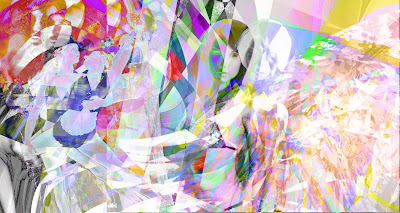 Thanks once again to MissBoux and Beatnikside for the use of their photographs in this picture :-)
Posted by Crescentsi at 12:08 pm 6 comments: 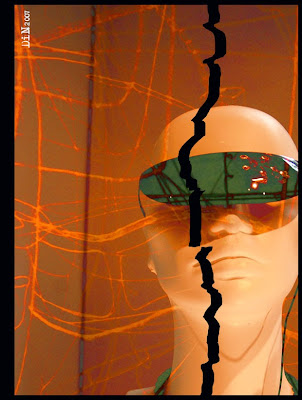 protocol requires they have to be adressed as Peaceful Omnipotent Total Unified Shader, however during the lunchbreak it is allowed to whisper POTUS
Posted by ed schenk at 12:46 am 2 comments: 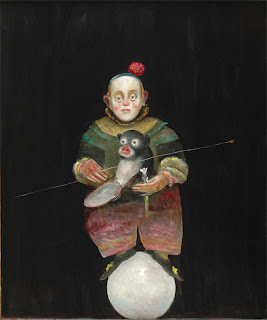 ....by Romanian artist Stefan Caltzia...
Posted by carmen racovitza at 6:53 am 8 comments:

a psalm forms
and resides
here

alertness
answers branch
against the window

once
clear now
covered with distraction

what color prayer
what texture
thought
Posted by Sheila Murphy at 8:36 am 4 comments:

”
Armed and famous
hybrid embryos
posing
as
striped rabbits
are the chosen
”
Posted by ed schenk at 11:14 pm 2 comments:

pressuring
the wheelspan
to push forward

where behold the
leitmotif this
offering

of
infinity your
final perfect destination
Posted by Sheila Murphy at 10:15 pm 5 comments: 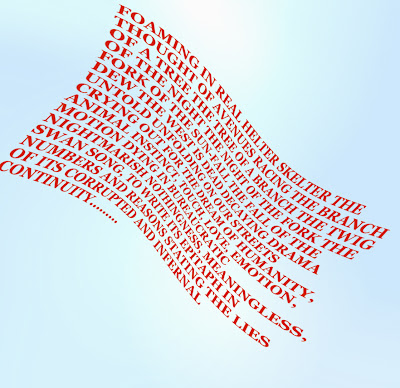 FOAMING IN REAL HELTER SKELTER THE THOUGHT OF AVENUES RACING THE BRANCH OF A TREE THE TREE OF A BRANCH THE TWIG OF THE NIGHT THE NIGHT OF THE FORK THE FORK OF THE SUN-FALL THE FALL OF THE DEW THE WEST IS DEAD DECAYING DRAMA UNTOLD UNFOLDING ON OUR STREETS CRYING OUT FOR THE DREAM OF HUMANITY, ANIMAL INSTINCT, TOUCH, LOVE, EMOTION, MOTION DYING IN BUREAUCRATIC NIGHTMARISH NOTHINGNESS, MEANINGLESS, SWAN SONG, TO WRITE ITS EPITAPH IN NUMBERS AND REASONS STATING THE LIES OF ITS CORRUPTED AND INFERNAL CONTINUITY..........
Posted by Crescentsi at 2:19 pm 1 comment: