Posted by Crescentsi at 11:02 pm No comments:

After watching the news on television today; the possibility of a double-dip recession in the US, much concern about the economies of major European players, rioting in London, UK, massive cuts to charities (UK) and continual uprisings in numerous countries across the World, I believe it is time to seriously consider cancelling out global debts in as fair a way as possible. If this prevents an economic depression then it would be very worthwhile, we only have to read modern history to realise this.
Cast your mind back approximately 15 years ago, when public pressure helped influence the G8 countries decision to cancel out debt, owed by developing or undeveloped countries to Western countries. This proves that the strategy of cancelling out debt is not "pie in the sky" but a plausible and sensible option. Of course, it all depends on those who are already powerful and wealthy and whether they wish to see a fairer world for the majority of people, rather than upholding a series of national and global systems that only benefits themselves.

Posted by Crescentsi at 4:13 pm No comments: 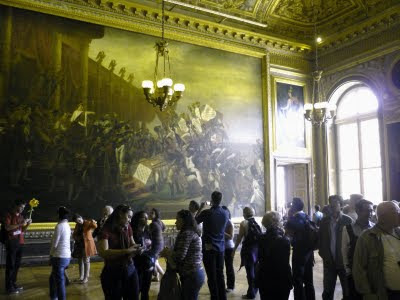 Chateau Versaille's juxtaposition of crowds of tourists from the world-over, beside 17th Century architecture, art, design and pictorial representations of French Royalty, really "struck a chord" with me. Indeed, Chateau Versaille is a work of art and the "Post modern phenomena" of global tourism creates its own aesthetic. Both together made me think of a theatrical performance on a global stage, a "danse automatique", unchoreographed and oblivious to a third juxtapostion of art; the "Postmodern photographer" reflecting on contemporary life and the state of the arts.

Pictorially, my main concerns with this photograph were to exploit the 3D elements of the photo, enhance the light (source and reflections) and to capture some rather strange, dance like movements of the tourists! Hopefully I've acheived this! :-)


Simon
Posted by Crescentsi at 2:32 pm No comments: