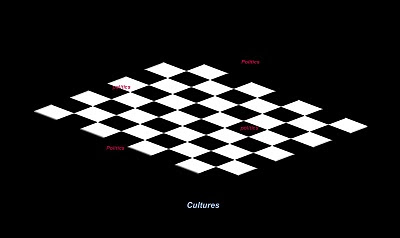 Conceptual Art dealing with Multiculturalism and Politics.
Looks better large - if you click on the image :-)
Simon
Posted by Crescentsi at 6:00 pm 2 comments:

http://www.flickr.com/photos/shemurph/
Posted by Sheila Murphy at 6:35 am No comments:

"I might venture to say that my new album, though it won't be thrash metal, will be a female companion of 'Reign in Blood' ".

All men are extinct. The moon makes combustion into a small sun. Her translation is reversed with the earth and makes the planet orbiting the fiery moon, which makes their female inhabitants live 24 hours of daylight. No, it’s not another one of those doomsday movies. Quite the contrary: it is a musical, a celebration but with tunes that are closer to Ozzfest than Broadway. Coitoris is the third film of the Mexican-Irish director Guadalupe Smithye, for the second time that incorporates the Colombian rocker Innita to deal with the soundtrack. And for good reason, the argument is adapted from an unpublished draft of short story written by Innita.

We are in this winter Sunday, December 20th, at Sundance Resort, where Guadalupe and Innita provide the first official press conference on Coitoris, whose premiere is scheduled for Sunday July 11, 2010. The event begins with a batch of questions and answers, some frames of film’s stages and costumes, and ends with a short presentation of Halo Limia, live keyboardist for Innita’s band, playing some advanced score with her Reactune. After an elegant little ceremonial greeting, Innita starts the press conference: "I can afford to be spoilers (spoiler) of my novel ROMA and read the last paragraph of the final chapter, Love."

After the freckled nude read paragraph, the questions begin:

Q: What new developments can you tell us about the story?
Innita: Coitoris happens 19 years after the extinction of the male, and the male gender in general, on the planet. The first generation of Coitoris women, it is, women born of lovely intercourse of two clitorises, have already spent their childhood and adolescence is being finalized. Extinct, men begin to be historical, archaeological stuff, like dinosaurs. Many things have taken new direction. Technology, now in the hands of women for nearly two decades, has advanced and environmentally progressive way that when developed in the company of men, and the space age unfolds and grows more interesting than sports. It is in this context where the story starts, when the moon makes combustion into a small sun. Telling you more would spoil surprises. "

Q: The rumor is that Coitoris is a musical that is not a musical ...
Guadalupe: But it is a musical. Even when it contains extended scenes of dialogue and monologues and thunderous action scenes, driving narrative that premium are the melodies that actresses and actors sing, which are the 10 songs on the eponymous album innit. If you mix "12 Angry Men," "Chicago" and " Sunshine " here you got a cinematographic idea of Coitoris.

Q: Dominique Pavlanova and Sunny Asgrez are recognized and award-winning actresses in the European stages, and so far only been made just plays. Is it not a risk being selected as stars and being directed cinematically?
Guadalupe: I've seen many of thier plays. They come from different schools. I am happy to join them in Coitoris. It is a challenge for them that adds extra flavor to the movie. Due to their theatrical underground, theatrical school gives me the exotic ingredients I need for film-themed space. Having started recording in November, my experience with them so far has not been at any time headaches or friction, on the contrary, it's like brand new unbreakable toy. It's something new for both parties.

P: The complexion of the bodies of Dominique Pavlanova and Sunny Asgrez respectively resemble the fiancee of Innita and also Innita herself. Is this story with biographical tributes from Innita?
Innita: hahahhaha.
Guadalupe: Interesting observation, but no, not really. I think more than you mean the bust size, you can ask bluntly. We were also told that if the bust of the stars refers to the busts of Innita and mine, to include our egos there, hehe, and they like to say that either.
Innita: Exactly that happened to us, even they are talking that Guadalupe and I are lovers. However, it has to do with the dangerous fashion breast reduction.
Guadaloupe: Aha, the fashion among women continues to grow today, and the debate on the issue encouraged the Hollywood press to speculate on Xetl Xihuatl, the protagonist of my previous film, with the false rumor that had reduced breasts for the movie. I wanted the Coitoris’ actors were distant breast size. It is now known of several cases of almost irreparable injury cases by clandestine reductions breasts, legal medical unsupervised, which become massive and early among girls 15 to 17 years aged and therefore I could not deny that I do want to share my views on the subject. In the booklet there is a small dialog that came with some black humor on this.

Q: There is a rumor that Innita appears in the film . . . . .
Gudalupe: Rumor discarded, I myself suggested to her, I began by suggesting a secondary role to decrease to a hitchcock style apparition, but in any case she didn’t want.
Innita: aha, it was. I do not feel, at least by now, the multi-artist who composes, sings, writes novels and apart from that she even acts. To act on some of my videos is enough for now.

Q: According to the official tracklist, we see that in your upcoming musical work the number of songs are reduced by almost half, if we take into account your 2 previous albums. Is this due to your busy schedule of constant touring, commitment to film or there is something to comment?
Innita: I wanted the new album, recording phase yet, be an outburst and intentionally I discarded the idea of swinging curves of ridges and valleys. " Good things, when short, are twice as good " "less is more", etc.. The album, like it is my short story in which Guadalupe based to expand to movie format, is a celebration. So my album Coitoris ignores the slow rhythms and melancholy of songs like " Vampirama ", " TV Sunsets ". I might venture to say that my new album, though it will be not thrash metal, will be a female companion of Slayer’s "Reign in Blood".

Q: According to a financial newsletter of Concordia Films, the film production has risen and risen to the point that they have integrated new investors.
Guadalupe: Right. Since I announced my new project publicly, Concordia Films has no objection to associate with other producers to give Coitoris technological quality and logistics necessary for its materialization.

Q: Will there be integration of the Innta´s tour “Coitoris Eronautica” with elements of the film, as directly as at the time Pink Floyd did it?
Innita: It's funny you ask that, for a couple of weeks ago I was watching the circular elements in the scenery of Pulse, and discussed some of there with my set designer and my producer on some of my visions for the tour. But regarding your question, I think it will have to wait to see the film and view the tour to get your own impressions.
Posted by No at 11:11 pm No comments:

Global Economics, Culture(s) and the Shaping of Scientific Theory by Pragmatism, the Arts and Cultural Change

Fuck a duck
duck a fuck a
duck fuck Three areas of text in this picture, that read;

We conspire to politics
Iris-like repetition"

Text by the artist.
Simon

Posted by Crescentsi at 6:42 pm No comments: This picture reflects the changes to our perceptions of our individual identities, as Western societies become ever more technological and commercial. We struggle for uniqueness and a comprehension of "self" as gender perceptions, multiculturalism and globalism, constant economic and societal change, mass technological immersion and political instability continuously occur.

Of course, social networking and other technological, communicative developments are a poor substitute for real relationships and friendships. However, it would be foolish to state that they are completely without their uses. The isolation that the Internet can cause to many people is ignored as we continue to "tell the world" via Facebook, how we have dumped our latest partner or just bought a new "Sat Nav".

Although this can seem very shallow, and to a degree it is! However, we are looking for varying degrees of fame, as Andy Warhol predicted. As we can no longer find the kinds of relationships within "real" society, we try to find impersonal and fleeting connections and acknowledgement via new technologies. Ultimately, all Internet users (apart from those who only look!) are chasing fame. Most will be disappointed.

Our excitement at the novelty of technological innovation and its opportunities are continually countered by the isolation and the fickle nature of the Internet, and other technologies. Many of us complain about the impersonal nature of society, that has been strengthened by new technology and worsened by the Recession. Are we willing to pay this price for a technocratic, capitalist society? And, importantly, do we really have much choice?

Posted by Crescentsi at 4:53 pm No comments: